Miga’s Secret is an illustrated and animated nursery rhyme, accessible through a set of seven concertina picture books and an interactive mobile application.

To come true Miga’s Secret needs:
Professional support and love from an experienced publisher and finance for further development and implementation.

“One for Sorrow” (see below) is a traditional children’s nursery rhyme, which superstitious people used to recite when they spotted one or more magpies. When I came across this nursery rhyme I was fascinated by the idea that the number of magpies – this beautiful and clever black and white bird – could mean good or bad luck.

I started to make up short scenes to illustrate each number in the nursery rhyme and designed them as endlessly repeating cycles. Miga is the clever magpie who’s exploring those scenes. She’s helping to deliver a happy ending in the seventh scene and disproves the widely spread prejudice that magpies are greedily stealing precious things.

While looking for a suitable format to display this seven animated scenes, I came up with the concept for Miga’s Secret which smoothly combines analogue and digital media and gives users the power to repeat each loop as many time as they like.

Kids (3 to 7 years old) as well as their parents will be delighted to discover all the details in the illustrated picture books and find the hidden gemstones and ∞-symbols in each story. These symbols will help them to access animated and interactive content on their mobile devices. Ideally the details and side actions in the picture will stimulate interesting conversations between parent and child.

Miga’s Secret is a fascinating experience for the user and at the same time an interesting concept for publishers and storytellers who enjoy to make the best of printed and digital media in combination.

The intention of this website is to showcase the concept and visual world of Miga’s Secret as well as attract interested partners to get involved with the realisation of this challenging ‘transmedia’ project.

One for sorrow,
Two for joy,
Three for a girl,
Four is a boy,
Five for freedom,
Six for the sky,
Seven is a secret,
Sparkling in your eye.*

Miga’s Secret addresses four of the five senses by cleverly combining analogue and digital media. Even if the battery is down, the concertina books offer loads of challenges and inspiration.

Miga’s Secret is a collection of seven concertina books, seven corresponding looping animations and a bunch of mini-loops and interactive game elements. All these elements are connected through an App which comes together with the book.

The app is not just a scanned version of the picture book. It rather provides extra content and game elements along with an exceptional soundtrack to create a complex narrative and a unique storytelling experience for the users.

Concertina Books: The small picture books (11cm *20cm, when closed) can be sold separately or as a collection of seven books in a nice slipcase. Either way they will come with a QR-code which leads to the download page for the App.

Even without the App these “Loop-Books” are a lot of fun. The concertina folding allows to read the books as never ending stories or to build panoramic stage sets. Each book tells one of Miga’s adventures inspired by the “One for Sorrow” nursery rhyme. The number of hidden ∞-symbols and appearing magpies in each book is corresponding to the number of the rhyme, what allows kids to learn the numbers 1 to 7. They need to search the imagery carefully to find the hidden ∞-symbols.

App: The scan function is the App’s most important feature. Only by scanning the hidden ∞-symbols in the picture books the digital content can be unlocked. Each scanned ∞-symbol will provide access to a mini-loop or an interactive element. As soon as all ∞-symbols in one book are scanned, the gemstone has to be discovered and scanned as well to unlock the main loop of the story.

The App creates a smooth connection between analogue and digital media. It comes with a treasure map to show which symbols are still missing, a playlist function where loops and mini-loops can be arranged individually and an access to the online-shop where the seven Loop-Books can be purchased.

Animations: Each scene lasts around 45 seconds. Clever camera movement and the architecture of the scenes make it possible to loop endlessly. Tim and Puma Mimi will compose exceptional soundtrack for each loop (maybe a Miga’s Secret soundtrack compilation is an option ;-)).

Mini-Loops and interactive game elements provide more insight into details of the scene, before the full 45 seconds loop can be accessed.

Watch the explanatory movie below, to get the right idea about this concept.

As the project is still under way, some of the scenes are further developed than others. There’s a storyboard and “Loop-Book” layout for each scene and an animatic for most of them. I already created styleframes for the scenes “Four is a Boy” and “Five for Freedom”.

The links below lead to the storyboards, animatics and styleframes of each scene. But first of all meet Miga the clever Magpie. 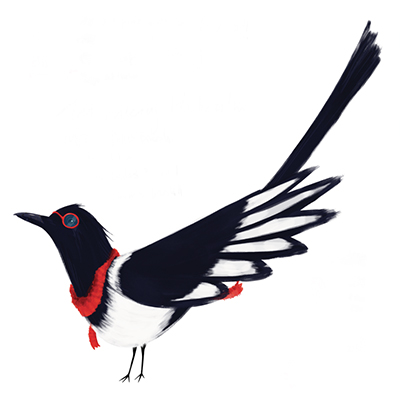 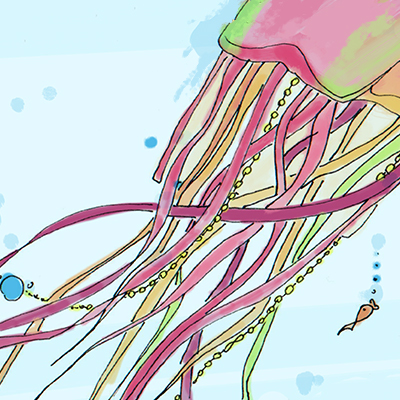 Three for a Girl 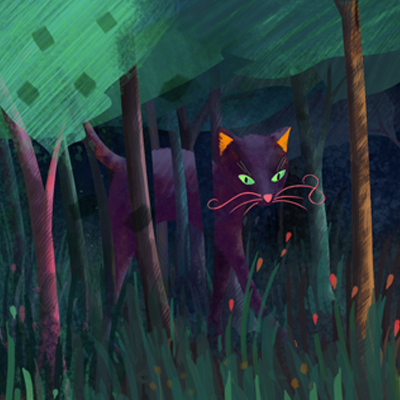 Four is a Boy 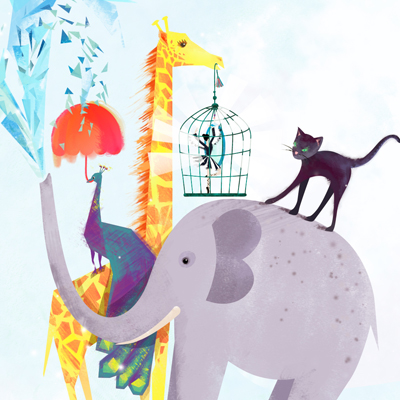 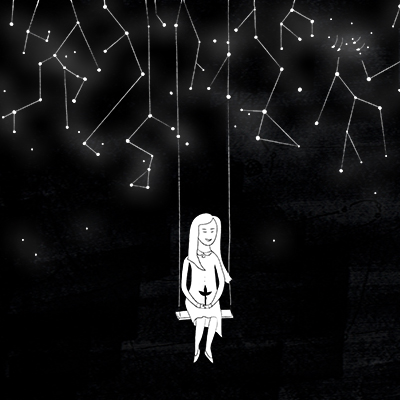 Six for the Sky 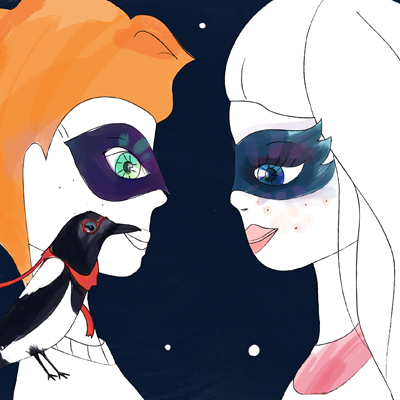 Seven is a Secret

As the inventor and author of Miga’s Secret  I entirely enjoy the visual worlds and the network of stories I created. I hope to spend many more hours in these magic places and finally bring the characters to life. 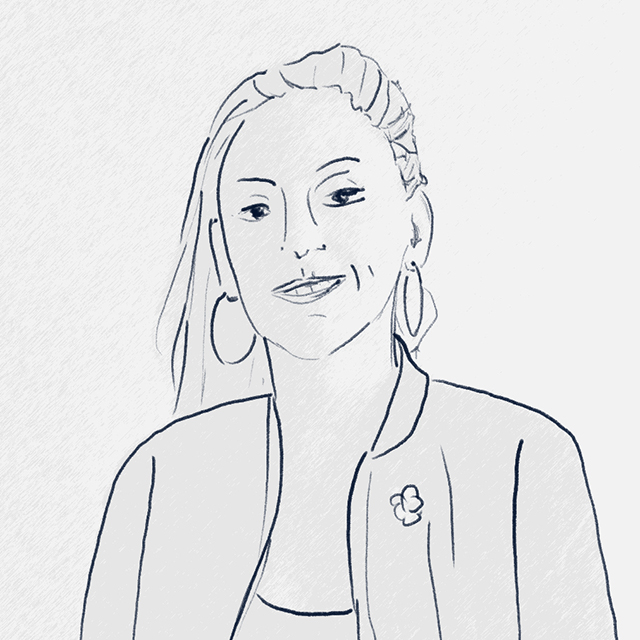 I’m a Swiss born and raised art director, animator and illustrator. After graduating 2005 with a Bachelor’s degree in Interaction Design from Zurich University of the Arts I spent several years abroad in London and Munich and gathered a lot of valuable work experience as hired staff and self-employed art director in various design companies.

At Velvet in Munich I contributed as junior and senior designer to projects for several international broadcasters and gained outstanding knowledge of the whole design and production process in broadcast design. Among the clients were: ZDF, Arte, Mega Greece, Disney Channel, Dragon TV Shanghai, Astro Malaysia, Bindass/UTV India, TVN Poland.

2008 I moved to London and was part of the design-team at Mainframe before I started to work as a self-employed art director, animator and illustrator.
As I a self-employed designer I had the pleasure to create for clients such as Proud Creative, London; Kompost, Zurich; Velvet, Munich; Perfect Accident, Munich; WeAreSeventeen, London.

While I usually enjoy to work for clients I always try to pursue my personal projects and refine my personal style. Miga’s Secret is the result of these efforts. When I realised that Miga’s Secret is going to require more time I applied to the Zurich Film Foundation for financial founding and I fortunately got support to develop this concept.

To find out more about me and my work check out my portfolio on monikarohner.com or my LinkedIn profile.
Im looking forward to any kind of feedback and to answer your questions.

Get involved and help to realise this beautiful concept.

To develop this concept I got granted financial founding from Zurich Film Foundation and Familien-Vontobel-Stiftung. This helped me to spend time on research and workshops, refine the concept and crate storyboards and visuals. To gain insight into this process make sure to look through my work in progress blog.

To move forward and bring the vision of Miga’s Secret to live I will need partners with experience in publishing and producing. If you’re interested to be part of this get in touch with your ideas using the form on the left. Any kind of feedback is highly appreciated!

Meanwhile I will further develop the look and feel of each scene and keep this website and the blog up to date.

Go to the Blog!